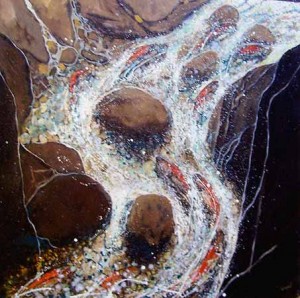 Sockeye salmon spawn only in streams having lakes in their watershed. The young fish, known as fry, spend one to three years in the freshwater before migrating to the ocean. They spend three to four years in the salt water, and thus are four to six years old when they return to spawn in the fall (September-December). Sockeye are blue tinged with silver in color during their ocean life. Male sockeye develop a hump during their transition from salt to fresh water and their jaw and teeth become hooked. Both sexes return to spawn with bright red bodies, green heads, and a dark stripe on their sides. When mature, they average 33 inches in length and weigh six to eight pounds.

Pink Salmon (also called humpies)
Pink salmon spawn in the Skagit Watershed only every other year; during years that end with odd numbers (1995, 1997, 1999…). This species prefers sloughs and slow moving water for spawning. The young emerge from the gravel during April and May and quickly migrate downstream as fry. They return to freshwater in the fall of the following year as two year old adults. These are the most abundant and the smallest of the Pacific salmon with an average weight of five to six pounds and length of 30 inches. These fish change from bright silver in the ocean to pale gray on the back with yellowish white belly when spawning. The males develop a large humpback during spawning, hence their nickname “humpies.”

Coho Salmon (also called silvers)
Coho salmon utilize shallower reaches of water and small streams in the Skagit Watershed for spawning. The young spend one to two years in the fresh water before migrating to the ocean in late March through July. During their ocean phase, coho have silver sides and dark blue backs. They will live in the salt water for one or two years before returning to spawn. During their spawning phase, the jaws and teeth of the coho become hooked, and they develop bright red sides, bluish green heads and backs, dark bellies with dark spots on their back. Mature coho average 38 inches in length and seven to 11 pounds in weight.

Chum Salmon (also called dog)
Chum fry migrate out to sea from March through July, almost immediately after becoming free swimmers. They spend one to three years traveling long distances in the ocean. Their ocean coloration of silvery blue green changes for spawning to splotchy purplish red and with distinct yellow and pink vertical bars on their sides. Color in the female is similar but not usually as distinct. Chum salmon develop a very hooked jaw with fierce teeth at spawning time. These are the last salmon to spawn (November to January). They utilize the lower tributaries of the watershed, tend to build redds in shallow edges of the watercourse and at the tail end of deep pools. Chum, on average, weigh eight to nine pounds and measure 40 inches in length. This species of salmon is the favored meal for wintering Skagit bald eagles.

Chinook Salmon (also called king, tyee, blackmouth)
Chinook are the least abundant species of salmon in the Skagit River Watershed. They are the longest lived and largest of the Pacific salmon. Chinooks spend one or more years in the fresh water before migrating to the ocean. They generally remain in the ocean for two to four years, although some stay as long as eight years. Chinook are overall olive-brown to purple in color with large irregular spots on their backs, upper sides and tails. The males are usually darker than the females. They do not change radically in appearance during spawning as other salmon do. Their principal spawning months are from August through October. Chinook, because of their size, generally stay in the deep, fast waters of larger streams and rivers. Chinook average 20 pounds in weight, but have been recorded up to 135 pounds, and can grow to a length of 58 inches.