Whale Watching is in Full Swing

Captain David, Naturalist Sam, and crewmembers Lauren and Michael were aboard our boat – the Island Explorer V.  The weather was gorgeous and sunny and we enjoyed a slight breeze as we left Cap Sante Marina headed toward the sea. We saw some shorebirds including Rhinoceros Auklets and Pigeon Guillemots. And of course gulls. We observed an Eagle’s nest high in the trees and a nearby Eagle scouting for food on the backside of Guemes. As we approached the backside of Vendovi Island we observed a large colony of Harbor Seals. We learned they can dive up to 1,000 feet for their food! The population of harbor seals in our area is healthy, which is a good thing for the ecosystem in our area. As we rounded the tip of Guemes toward Vendovi Island/Samish Island we found our first pod of Bigg’s whales. They looked like they were finishing up a hunt – perhaps a seal? We were one of a few boats there. All of us on the boat were amazed to see them, occasionally poking their heads out of the water. 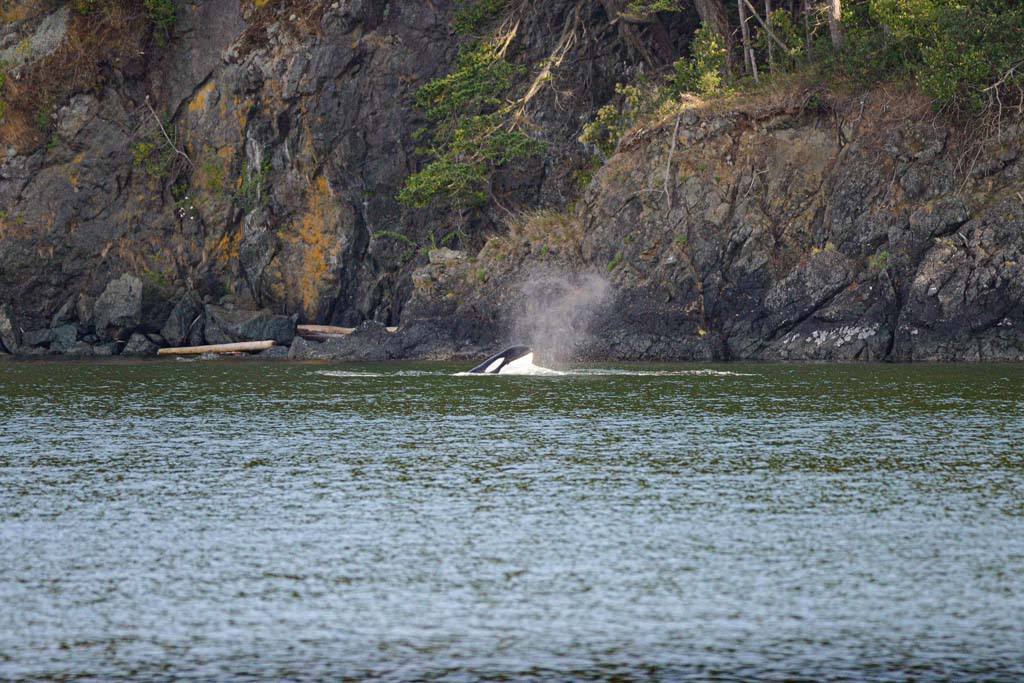 We left to go back to the backside of Vendovi Island and found the whales headed that direction as well. We watched them make several meals of harbor seals – a healthy ecosystem at work! A couple of eagles were seen waiting in the trees and would swoop down for their opportunity for leftovers in the water.  I loved seeing a couple of younger whales in the mix and was thrilled to get so many great photos – right up until the end when we had to head back. I’ve lived in our state for most of my life, but never went on a whale watch here and I would totally do it again. Such a great trip with some fantastic hosts!

Gear:I used a Nikon D800 with a 200-500 mm Tamron lens with a lens hood to help with sunspots. I was really pleased with the images I was able to get and highly recommend a longer lens if you are going on the trip. Use a fast shutter speed to capture the action!

Island Adventures puts notes on their tour day as well. I went on the 7/8/21 evening tour. Notes are here: http://blog.island-adventures.com/