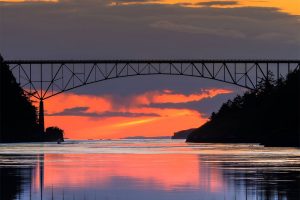 Learn about Deception Pass, the Bridge and surrounding area on this amazing Deception Pass Tour aboard the “Island Whaler.” Enjoy the thrill of the fast jet boat through Deception Pass and the knowledge and history you will learn!

Hop aboard and have a seat!  The skipper will greet you and the knowledgeable tour guide will begin….

When leaving the dock out in front of you just over the hill you can see Mt. Erie. Mt. Erie is the tallest point on Fidalgo Island and you can drive right to the top where the two towers are. On a clear day you can see all the San Juans, up Saratoga Passage and into Canada.  Once you clear Houpis point you can see Mt. Baker.  Mt. Baker is the third tallest mountain in Washington just over 10,000 feet.  It has snow on it year round and is an active volcano, a Strata volcano. Every once in a while you can see plumes of steam venting from the back side.

Then as you round the corner you can start to see the bridge and Ben Ure Island.  A man named Ben Ure (you guessed it) lived here in the late 1800s and he was a smuggler/slash pirate. He used to smuggle goods through Deception Pass and stash them on Ben Ure. But there were these people like boarder patrol back in the day they were known as regulators. They would obviously try to prevent you from bringing goods in to the United States illegally, so to combat this, his wife who was a native American would sit on the west end of Strawberry Island (just to the right of Ben Ure Island).  From the west end of Strawberry Island, you have a direct line of sight through Deception Pass out into the south end of Rosario Strait. So if these regulators were not around Ben Ure’s wife would start a fire, but if they were around she would snuff it out and Ben Ure would know that it is not safe to pass through and he would throw all his goods overboard. Now he would not just smuggle in goods he could plunder off of other ships. He would also smuggle in rum, opium, and illegal immigrants to work on the railroads. He would keep them in burlap sacks so they could not get away, and he’d throw them overboard too. Due to the currents in Deception Pass, they would all get pushed 14 miles west all the way to San Juan Island where they would all congregate into one specific cove that has now been deemed Dead Mans Cove. That is not all that would wash up on the shores. There was a fruit farmer that lived on Whidbey Island back in Ben Urs’s day, and he was walking down West Beach and found a bunch of cans of what he assumed was mineral paint. Well, he ended up painting his house with the substance and some years later found out that it was $4,000 worth of opium.

Deception Pass bridge was constructed in 1935, took about a year to build at a cost of only $315,000, it actually cost more to repaint the bridge in 1983 than it did to build it. She sits 186 feet above the water and is more than a quarter mile long. More than 6,000 people showed up to opening day and 700 cars crossed it in the first hour. Today, we get about 20,000 cars across daily.

Soon after the tour begins you will see a large bald eagles nest high up in an evergreen tree. It is kind of hard to tell how big Bald Eagles are when they are sitting way up there , but perched they sit 21” tall and have a wingspan of eight feet. The female, who is slightly larger than the male, can weigh as much at 12 pounds. Eagles have extraordinary vision and if they could read, they could read newsprint from the treetops— about 150 feet up!  When an eagle decides to clamp onto something such as a fish with his talons, he can push down with about 1,000 pounds per square inch of force. Once he has latched onto it, he lacks the muscles to release it again until he lands. Some times you see them hit the water and try to pick up a fish that is too heavy for them. They flap and flap and end up having to sit down in the water, but they don’t really float like a duck would. They sink up to their necks and have to swim back to shore.  Bald eagles are kind of funny creatures. They mate for life and they come back to these same nests year after year. They repair the damage that happened while they were gone and build them larger each time they come back. They will build them so big that the branches below can’t support the weight and will just shear right off the tree. The largest nest ever recorded is down in Florida and it is nine feet wide and 20 feet deep.

Now better than Eagles, Deception Pass is home to a nesting pair of Paragon Falcons. Falcons don’t make nests they lay their eggs right on the ledge of these cliffs. They are medium sized Falcons, having a wingspan of about a foot and a half, but more interesting than that, they are the fastest animals in the world. They have been clocked at over 280mph. They were used in World War II to take down pigeon carriers, and are being introduced into large cities to help take care of their pigeon problems.

The tour boat will get very close to the cliff and shut down momentarily so you can see a cave. The cave actually used to be a prison mining camp back in 1910 and ran until 1914. It housed 40 prisoners, and as you can imagine, it only took one guard to keep everyone here, due that it was kind of take your chances in the drink or hike up this cliff pretty quick. The prison was run by the state and was said that they were looking for gold and magnesium, they never found any but what they did have was a large byproduct of rock, obviously  You will be able to see the foundation and a bunch of rebar sticking out where a rock crusher used to be.  It is about 100 feet deep all the way up to the cliff.  They would roll barges up to this cliff and load all this crushed rock on to the barges and ship it down to Seattle. If you have ever heard that Seattle was built on sawdust, this is where some of the rock came from to rebuild the waterfront. It closed down in 1914, and all the wood was salvaged in the mid 20’s to help build that park.

The madronas trees are beautiful from the water.  These are the Pacific Madrone or Madrona. Native pretty much up and down the Pacific coast of North America, and have a big tap root that is good for digging in to the cliffs around here—they are actually an evergreen tree oddly enough. Up in Canada they call them Arbutus and the Native Americans called them people trees, due to how soft the bark is and how it can be peeled away reveling a fleshy tone underneath. Down in Mexico they call them tourist trees because they peel just like the tourists do.

The next part of the tour takes you through Canoe Pass  Canoe Pass was named by the Coastal Salish People because it was a easier to come through Canoe Pass rather than Deception Pass, fewer whirl pools and less turbulent. The water can flush through Canoe Pass extremely quickly at about nine and a half knots (1.15mph). On a really big tide, it works out to be about 900 million gallons of water passing through in a minute. We get lots of extreme kayakers that come to test their talents in the quick moving water of Canoe Pass. Every once in a while you can catch scuba divers out here. They dive down on one side, get shot through, and picked up on the other. Over in Deception Pass there are these large caves where octopus live. We do have the largest octopus in the world here in the San Juans—The Great Pacific Octopus. The largest one ever recorded was caught off the coast of Vancouver Island. He actually lived in an old vintage VW Bus down there and he was 34 feet across and weighed more than 600 Pounds. You can actually go visit him. He is up in the Vancouver aquarium and his name is Oscar.

Back in 1866 about 1,000 acres around Deception Pass was bought up by the federal government. They thought that it would be of key military importance due that it is kind of the ‘back door’ into Puget Sound. The only part that they ended up fortifying was just before World War I and that was West Point. They placed a large search light out there and a big piece of the foundation still remands today.  Directly off to the left of West Point is a big rock that you see on West Beach. That is Gun Point. They placed a cannon out there. It was never fired and was all taken down after WWI concluded. All the land was sold to the state in the mid 20’s and was made into a state park about five years later. It now boasts over 4,000 acres in Island and Skagit County.